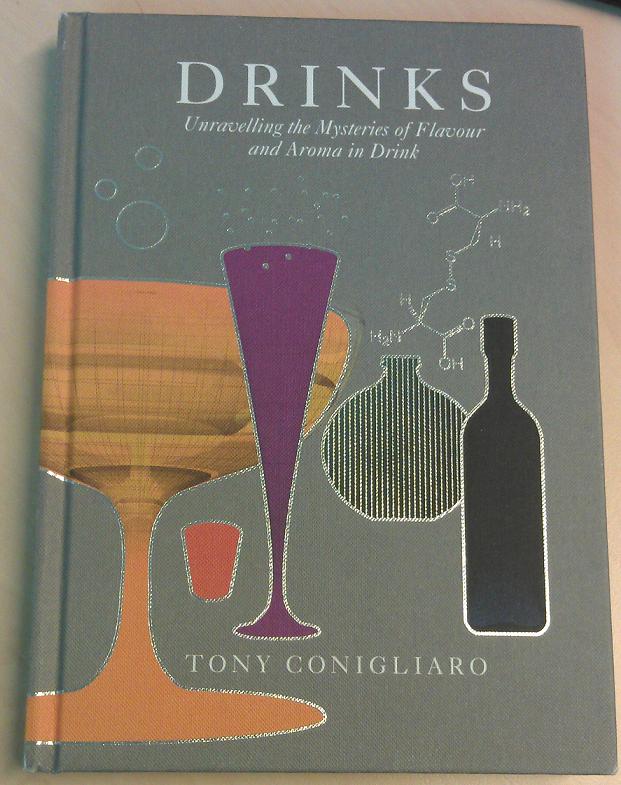 CocktailMolotov has already read Drinks by the famous owner of the 69 Colebrook Row, Tony Conigliaro. The book is definitely a must-have, and you can understand this just by reading the little phrase that accompanies the title « Unravelling the Mysteries of Flavour and Aroma in Drink ». The Table of Contents is also evidence that you just opened something different. Chapter 1 is entitled « Classics & Spins ». One single chapter about variations of classical cocktails, when it would be 80% of the information contained in a lot of other books, this is really new. The same could be said about « Glassware » that only got three little pages in the end of the book. Everything else is totally new and pure knowledge about cocktails, between science and poetry, with evocative names such as « Savoury », « Inspired by Perfume » or « Techniques & Equipment ».

How can someone talk about dehydrators or homogenizers and « Les Fleurs du Mal » (The Flowers of Evil) in the same book ? Tony C can, and this is exactly what he does when he reveals the recipe of a cocktail that would have pleased Baudelaire himself : the absinthe pushes the drinker to the evil side, while the rose vodka evokes the purity of heaven. The drink is related to the industry of perfume, as rose and absinthe are two well-know essences used in perfumes.

The whole book is clearly a connection between the two industries : flavour-oriented, precise, sharp and evanescent at the same time, every recipe has been tailored the same way a perfume would have been.

What is a bartender doing in a science lab ?

Also very interesting for cocktail geeks like us, is a very documented chapter about different machines used to create your own liquors and tinctures. The purpose is to control every ingredient you put in your cocktail, to be sure that it tastes exactly the same as the one you prepared three months. A bartender who masters these techniques is not dependent on his suppliers, whose disponibility or quality may vary. But there is more to it : the only limit he has now is his own imagination, as he does not have to wait for a product to be created by a distiller and can now make his own, in his « lab ». A good example is the port reduction,which is basically just port, without the alcohol content, allowing it to be used in a variation of the El Presidente cocktail without overporwering the rum.

Being ourselves « scientists behind a bar », we have been very pleased to find a book as rigorous as an experimental protocol would have been. For each creation of a new spirit or cordial, Tony has tested various methods and proportions, scrupulously writing in his notebook each variation induced by a change in the recipe or technique. He even made 48 bottles of Manhattan, that he opens each year since 2004. We are talking about long-term experiments !

Luckily enough, we drank a few cocktails at the two Conigliaro’s venues, 69 Colebrook Row and Zetter Townhouse. Are they the best you would ever have, you tell me (to me drinking the Master at Arms had the same effect as the first Daiquiri 8:2:1 I had), but for sure what you cannot say, is that you already drank something close to Tony’s cocktails. The same could be said about this book : I have never read a book about cocktails that looks anything like « Drinks », and 90% of this work is new to most of the bartenders or cocktail enthusiasts. Of course, a lot of people know that Tony C is working with these techniques, but it has been written down for the first time.